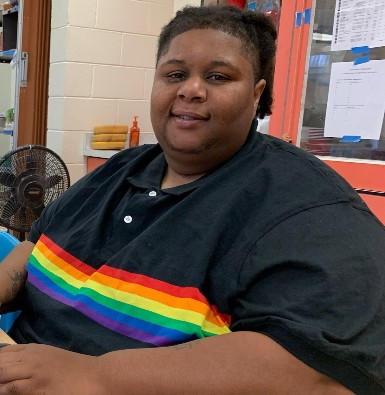 Sometimes it takes the right choices to be offered to help pave a positive path forward. In the words of Nelson Mandela, “May your choices reflect your hopes not your fears.”

For Tamika Ponds, a 2022 graduate, Cheyney provided her with choices that were supported by guidance from staff members. These choices have allowed her to earn degrees in programs such as English, Art, and Communication, as well as to become a Supplemental Instructional Leader and enroll in a graduate program.

Ponds admits that it has not been an easy journey, especially when it comes to academics. She dropped out of high school in 9th grade, before eventually returning and earning her GED. Additionally, getting through community college had been a huge challenge for her.

Then, she met Vernell Edwards, who was Assistant Registrar at the time, at a college’s recruiting event. He asked to see her transcripts, because she might qualify for a scholarship, but she was hesitant and didn’t believe in herself and academic abilities at the time.

“I wasn’t going to show him because in my mind, I wasn’t good enough for a full scholarship nor knew if my GPA met the criteria,” said Ponds. “Something in me made me submit my transcripts. Within a week, Mr. Edwards got back to me and said I was eligible and I could enter the Keystone Honors Academy.

“I was ecstatic, overwhelmed with excitement and joy with the opportunity.”

From that moment, she committed herself to the unique journey she was embarking upon. She was determined to demonstrate to the university that had realized she had something special in her, that it was no mistake giving her a chance to prove something vital to herself. That she could become successful.

“It’s hard to believe how far I’ve come, especially as a non-traditional student,” said Ponds. “I currently work at the same school that gave me a chance to better my future.”

Ponds is a Supplemental Instructional Leader at Cheyney, where she hosts workshops to assist students with writing development. Additionally, she is currently a graduate student in the Goddard College’s Creative Writing program where she takes courses virtually and is an editor for the school’s literary journal.

Her ultimate goal is to use the skills she learned before and during her time as a student to teach students in a classroom of her own someday.

“I want to work with college students from diverse backgrounds; those who have set their goals and especially those, who like me, need that extra push to find success.”

During her time at Cheyney, she met some of the most amazing people who helped her from day one, including Stephanie Stevens, Interim Registrar, in the Enrollment Office. Meeting and getting to know some of the professors gave her faith in herself and the boost she needed.

“Seeing Black women like Dr. Norma George (Professor, Humanities Department) and Dr. Tamara Hollins (Professor of English) each reminded me that there are no do-overs in life,” said Ponds. “They grounded me in a way that forced me to take life more seriously. Seeing women like them made me feel I could have a place in academia as well.”

Ponds said that if nothing else, she is an individual who embodies what it means to never give up.

“I was a high school dropout who became a professional academic. I learned to never give up on myself, even when it seemed as if the world had written me off. Let my journey be a reminder that none of us lack what it takes to become amazing individuals,” said Ponds.

“I am forever grateful and humble to be part of the legacy of Black excellence that I read about, especially those who have roots in Cheyney University. Cheyney chose me.”